During the Fruitmarket’s recent renovation we ran two extended projects, Beginning a Line and Writers’ Shift. Each made use of the time during our building’s closure, marking it with newly commissioned work from dancers, poets, artists and writers. Over these days we will share the creative results that have inspired us while we were closed and energised us as we’ve opened our reimagined building. 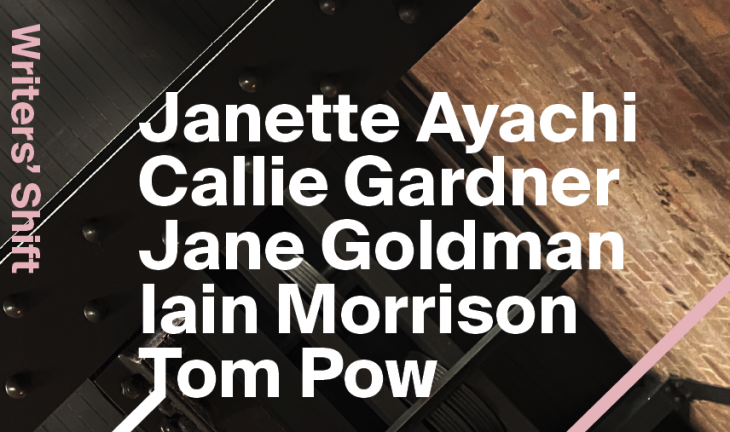 What happens when a team of poets joins a major cultural organisation busily remaking itself ready for the middle years of the 21st century? And what result when you throw a slew of unpredictable geopolitical and social shifts into their path?

Writers’ Shift asked five poets, Janette Ayachi, Callie Gardner, Jane Goldman, Iain Morrison & Tom Pow, to follow their individual interests in exploratory writing around the Fruitmarket, its past, present and future. What results are poems that find fascination in 50 years of art and artists, and which examine the infrastructure surrounding our gallery in the city and in the wider world.

Tonight we launch a new publication that collects the poets’ work alongside contributions from author Shola von Reinhold and members of the Fruitmarket’s staff. Book either an in person ticket, or you can stream the readings online. Book Now

We particularly celebrate the contribution to Writers’ Shift of poet Callie Gardner, who died unexpectedly last year. Their colleagues, the Writers’ Shift poets, read through Gardner’s remarkable extended poem which takes particular interest in the movement of art work between institutions and across borders, and draws heavily on the Fruitmarket’s archive of past exhibition material.

Kate Livingstone’s suite of drawings responding to the poets’ work is displayed in our cafe. MEMBRANE, a filmpoem collaboration between artist film makers Anneli Holmstrom and Joakim Finholm, and Writers’ Shift poet Janette Ayachi is part of tonight’s programme.

Women at the Fruitmarket

During her research for Writers’ Shift, Jane Goldman researched women’s participation in the Fruitmarket during the ‘70s and ‘80s. Contributions from two of the women she made connections with form part of these days’ programme. 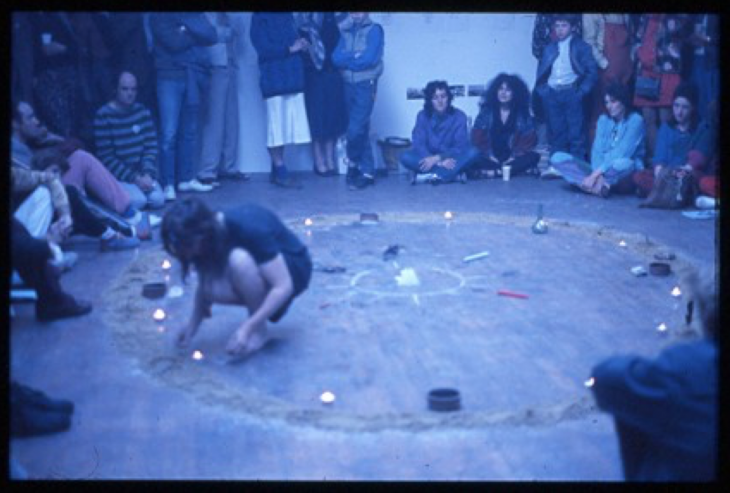 Jill Smith (born 1942) was the first woman to show in the Fruitmarket’s exhibition’s programme in 1975 when she was working as a pioneering performance artist with her then husband Bruce Lacey. During the 1980’s her work became increasingly a walking practice with one fabled route from older traveller communities The Gypsy Switch taking her across the whole of the British Isles over a full year on the road in 1984-85, visiting a different sacred site at each sign of the zodiac. She has published a memoir of these years The Gypsy Switch and Other Ritual  Journeys (2019) with a foreword by artist Jeremy Deller. Smith’s contribution to the 1975 Fruitmarket exhibition, as well as many elements of her joint practice with Lacey at that time, have been under-recognised or written out of the archives. Writers’ Shift poet Jane Goldman reconnected us with Smith who is now based on the Isle of Lewis. Making up for lost time, we welcome this artist and writer back to the Fruitmarket nearly 50 years since she last visited.

Louise Dick (born 1960) first visited the Fruitmarket in the ‘70s when her art teacher at Craigroyston School, John Kirkwood, brought her to see an exhibition which included his sculpture. After attending art college in London, Dick returned to Edinburgh and worked as a gallery assistant during the ‘80s, a period with many exhibitions that continue to strongly resonate in the Fruitmarket’s history. Dick has worked as an artist and teacher in the city since that time. Jane Goldman’s poem ON GROWTH AND FORM (FIBONACCIS FOR LOUISE DICK) charts Dick’s life against the structures of spiral growth in nature investigated by the theories of D’Arcy Wentworth Thompson (1860–1948). The Scottish biologist and mathematician’s ideas have inspired much of Dick’s art, a connection made closer by the fact that Dick now lives in the house where Wentworth Thompson was born.

Artist, performer and writer Jill Smith will make a performance ritual in the Fruitmarket’s new Warehouse, the traces of which will remain over the days of the renovation projects celebration.

Jane Goldman introduces Jill Smith, the two read Goldman’s poem THE MANIFESTATIONS OF THE OBSESSIONS AND FANTASIES OF BRUCE LACEY AND JILL BRUCE IS A SOLO EXHIBITION BY BRUCE LACEY and Smith presents the development of her art practice from the 70s to the present day. The event will weave Smith’s story into that of women’s activism taking in the protests at Greenham Common and the solidarity she found in women’s art collectives. Always finding ways to keep making work even when tides of favour and resources have been diverted from her, Smith’s story is one of resilience and deep commitment to her chosen life. 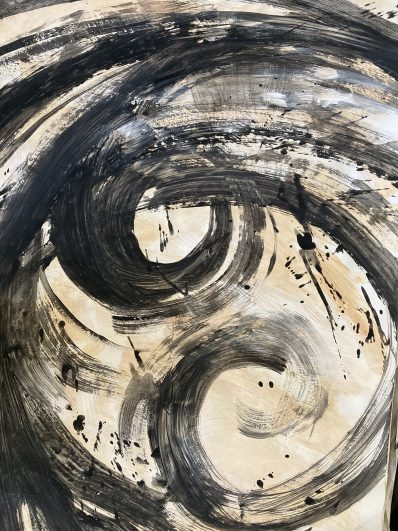 Artist, teacher and former Fruitmarket staffer Louise Dick leads a drawing workshop based on spiral forms. Inspiration is taken from her recent practice and the ideas of Scottish biologist and mathematician D’Arcy Wentworth Thompson.

Beginning a line is beginning a building: a live archive of transition

A collaborative project by artist and poet Rhona Warwick Paterson and dancer and choreographer Eve Mutso that responded to the period of the Fruitmarket’s redevelopment and reopening in word, movement and sound. 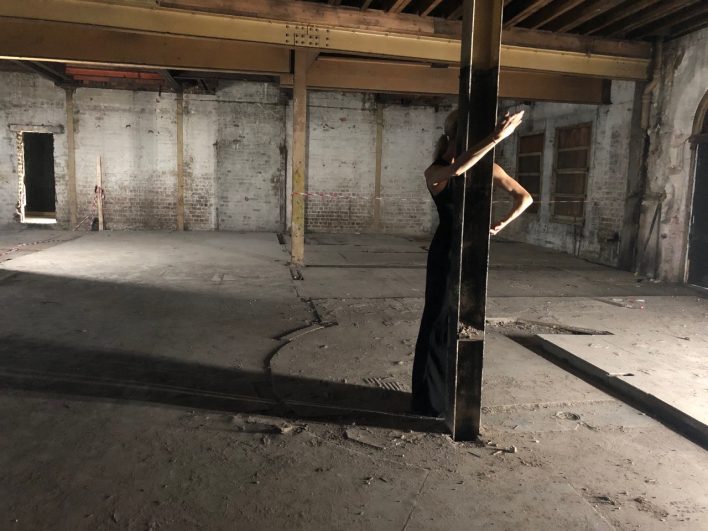 A film screening and panel discussion in celebration of three choreopoems – After Orta, Cunei Form  and  Lean To – by artist/poet Rhona Warwick Paterson and dancer/choreographer Eve Mutso. A cross art form, collaborative project, working with filmmaker Brian Ross, Beginning a Line  creatively documented the transition of the Fruitmarket as it entered into a new phase and a new set of walls.

Beginning with a film made in the galleries shortly before we closed our doors for renovation in 2019 and closing with a final film made in celebration of the new Warehouse space, Warwick Paterson and Mutso have made three films that address the nature of site, palimpsest and language as an embodied experience, with research material sourced from archaeology, choreology, the Fruitmarket’s exhibition history, and the architectural, physical and historical elements of the building.