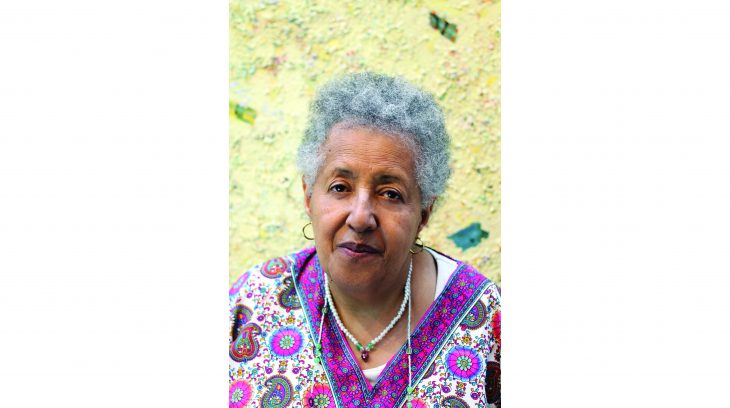 Artist, activist, writer, and teacher Howardena Pindell began her career in the 1960s. Born in Philadelphia in 1943, she studied art at Boston and Yale Universities and became an Exhibition Assistant at the Museum of Modern Art in New York in 1967, rising to Associate Curator and serving on the Byers Committee to investigate racial exclusion in museum acquisitions and exhibitions.

She first exhibited her art in 1971, and was a founder member of A.I.R (Artists in Residence), the first women’s cooperative gallery in New York City. Resigning from MoMA in 1979, she became a professor in the Art Department at Stony Brook University, where she still teaches. She rose to prominence throughout the late 1970s and early 1980s, and had a major solo exhibition at the Studio Museum, Harlem in 1986.

In 1992, Howardena Pindell: A Retrospective, her first solo touring exhibition, brought her art and writing together and in 1997, she published The Heart of the Question, an anthology of her written works. She was included in WACK! Art and the Feminist Revolution at the Museum of Contemporary Art in Los Angeles in 2007; in Soul of a Nation: Art in the Age of Black Power at Tate in 2017; and The Museum of Contemporary Art Chicago presented her first major US survey exhibition, Howardena Pindell: What Remains to be Seen in 2018.

In 2020, an exhibition of new work at The Shed, New York articulated Pindell’s response to racism and white supremacy against the backdrop of the Black Lives Matter movement and growing international outrage at anti-Black state violence in the US and elsewhere, in the wake of the murder of George Floyd.