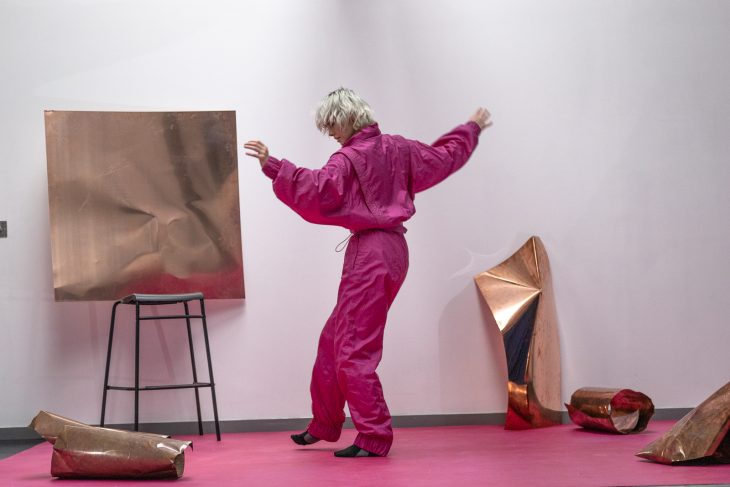 Fruitmarket and Dance Base Scotland are thrilled to announce that dance artist Laura Fisher has been selected as the SPACE/FRAME Residency Artist.

SPACE/FRAME is a unique opportunity for a dance/movement artist to work in residence with the Fruitmarket and to create a work in response to their current installation, Jyll Bradley’s Pardes.

Laura Fisher (she/they) was chosen from an open call and will spend two weeks interacting with the installation, the architecture of the Fruitmarket Warehouse, and then share her response in the final weekend of the installation.

The Fruitmarket Warehouse provides new opportunities for performance-based work and Jyll Bradley’s generous installation, Pardes is an invitation as much as a sculpture, enticing us to inhabit it individually and in groups, in silent contemplation collaborative, cross-art-form working or for joyous, noisy events – the perfect place to let a dance artist explore.

As part of the residency Laura will work in Dance Base and the Fruitmarket for a fortnight and host a public sharing of her work in Pardes on Saturday 16 April. Both organisations are looking forward to welcoming Laura into their programmes and to supporting this development in her creative practice.

More details on the residency and sharing will be announced soon.

Sam Woods, Fruitmarket Curator: Exhibitions & Commissions said: We are delighted to be working with Dance Base to welcome dance artist Laura Fisher to respond to the Fruitmarket Warehouse and Jyll Bradley’s installation, Pardes. We are intrigued to see what form her residency will take and look forward to sharing Laura’s thoughtful, questioning and compassionate practice with our audiences.

Tony Mills, Artistic Director of Dance Base said: I’m really excited at the prospect of this new collaboration with Fruitmarket and how this provides a chance for dance artists to create work for a different context. Working with new partners and in new conditions is a great way to challenge your practice and discover something new. I can’t wait to see what Laura will come up with.

Image: Laura Fisher,FORGED (in the tender heat of your embrace). Photo: Emily Nicholl.

About Laura Fisher
Laura Fisher is a dance artist, producer, and choreographic performance maker based in Glasgow, Scotland. She works across live art, dance, design and club performance.

As a Producer, Laura was selected for the Edinburgh Fringe Emerging Producers Development Programme 2019 and was awarded an FST Producers Bursary to undertake a placement at The Work Room, Glasgow developing an artist led model for a new dance scratch night in Scotland. Laura is currently awarded a place on the Dancers Emerging Bursary Scheme 20/21 at Dance Base, Scotland’s National Centre for Dance under the mentorship of Lucy Suggate.

Laura holds a BA (Hons) Contemporary Performance Practice with Honours of the First Class from the Royal Conservatoire of Scotland. She studied dance at Trinity Laban Conservatoire of Music and Dance and classical ballet at the Dance School of Scotland from 2005-2011.

About Jyll Bradley
Jyll Bradley was born Folkestone, UK in 1966, and lives and works in London. She studied at Goldsmiths College (1985–88) and The Slade (1991–3). Since the early 1990s she has exhibited in the UK and internationally including: The British Art Show, Hayward Gallery, London (1990); Museo De Antioquia, Medellin, Colombia (2004); Arnolfini, Bristol, (2005); the Walker Art Gallery, Liverpool (2008); Newlyn Art Gallery (The Exchange), Penzance (2010); the Bluecoat, Liverpool (2011); Folkestone Triennial (2014, 2017, 2021); Turner Contemporary, Margate (2017–19); Sculpture in the City, London (2020–21). Jyll has undertaken projects for significant cultural events including Liverpool, European Capital of Culture, 2008 and theCentenary of Canberra, Australia, 2013. She has also worked extensively as an award-winning writer for BBC radio. During 2020–21 Jyll created two collaborative film projects with leading U.S. composer Anna Clyne commissioned by Scottish Ensemble and New York’s Orchestra of St Luke’s. Most recently her autobiographical film M.R. featuring music by Glasgow based Irish composer Linda Buckley premiered at The Folkestone Triennial 2021. Jyll’s forthcoming projects include Thresholda sculpture work in Kaunas, Lithuania for the City’s year as European Capital of Culture 2022.

About Fruitmarket
Fruitmarket is a free, public space for culture in the heart of Edinburgh, which provides inspiration and opportunity for artists and audiences. We programme, develop and present world-class exhibitions, commissions, publications, performances, events and engagement activities, opening up the artistic process. Creativity makes space for meaning, and we create a welcoming space for people to think with contemporary art and culture in ways that are helpful to them – for free.

About Dance Base Scotland
Dance Base is Scotland’s National Centre for Dance and exists to encourage and celebrate the potential for dance in everyone. We offer a vibrant and uplifting focal point for dance as an art form, a physical and creative activity, and a way of life. We reach out and work in partnership to inspire creativity, to cultivate a future for dance in our communities and to support individual and community wellbeing.