The Union Makes Us Strong 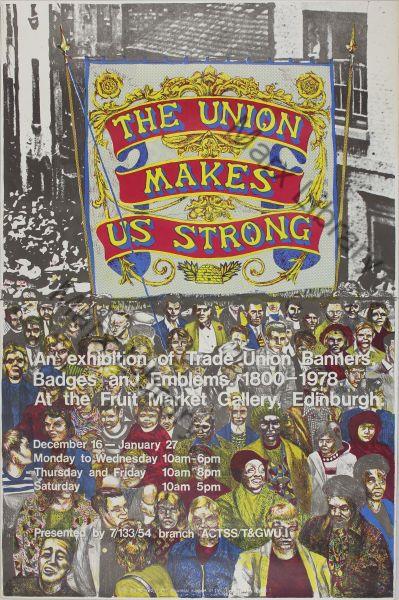 The Union Makes Us Strong was an exhibition of trade union banners, sashes, badges, emblems and other artefacts. It featured over a hundred items spanning 150 years of labour history in Britain, with some dating back to the 1820s. The ephemera on display was loaned from private collectors, or obtained through the Scottish Labour History Society, who led a campaign for the recording and preservation of such artefacts. Trade union banners and other memorabilia functioned to illustrate the struggles and triumphs of the labour movement, to showcase the artistic merits of workers’ craftsmanship, as well as to rally and rouse the spirits of their members. The visual motifs of medieval guilds featured heavily in trade union designs.

The Union Makes Us Strong was organised by a planning committee made up of representatives from a number of different unions. The exhibition was officially presented by the Edinburgh Branch of the Association of Clerical, Technical and Supervisory Staff (ACTSS)/Transport and General Workers Unions (T&GWU), supported by the Scottish Trades Union Congress, Scottish Labour History Society, and Edinburgh and District Trades Council. The exhibition received funding from the Scottish Arts Council, and local branches of a dozen other trade unions. About 120 other labour organizations, in Scotland and beyond, played a part in the exhibition coming together.

The Union Makes Us Strong exhibition followed in the footsteps of a similar showing of trade union memorabilia, Banner Bright, that took place at the Whitechapel Gallery in London in 1973. Banner Bright went onto tour to the Gallery of Modern Art, Glasgow, where many of the items on display were replaced with Scottish trade union artefacts. The Union Makes Us Strong was a timely programmed exhibition at the Fruitmarket, coinciding with the Winter of Discontent.