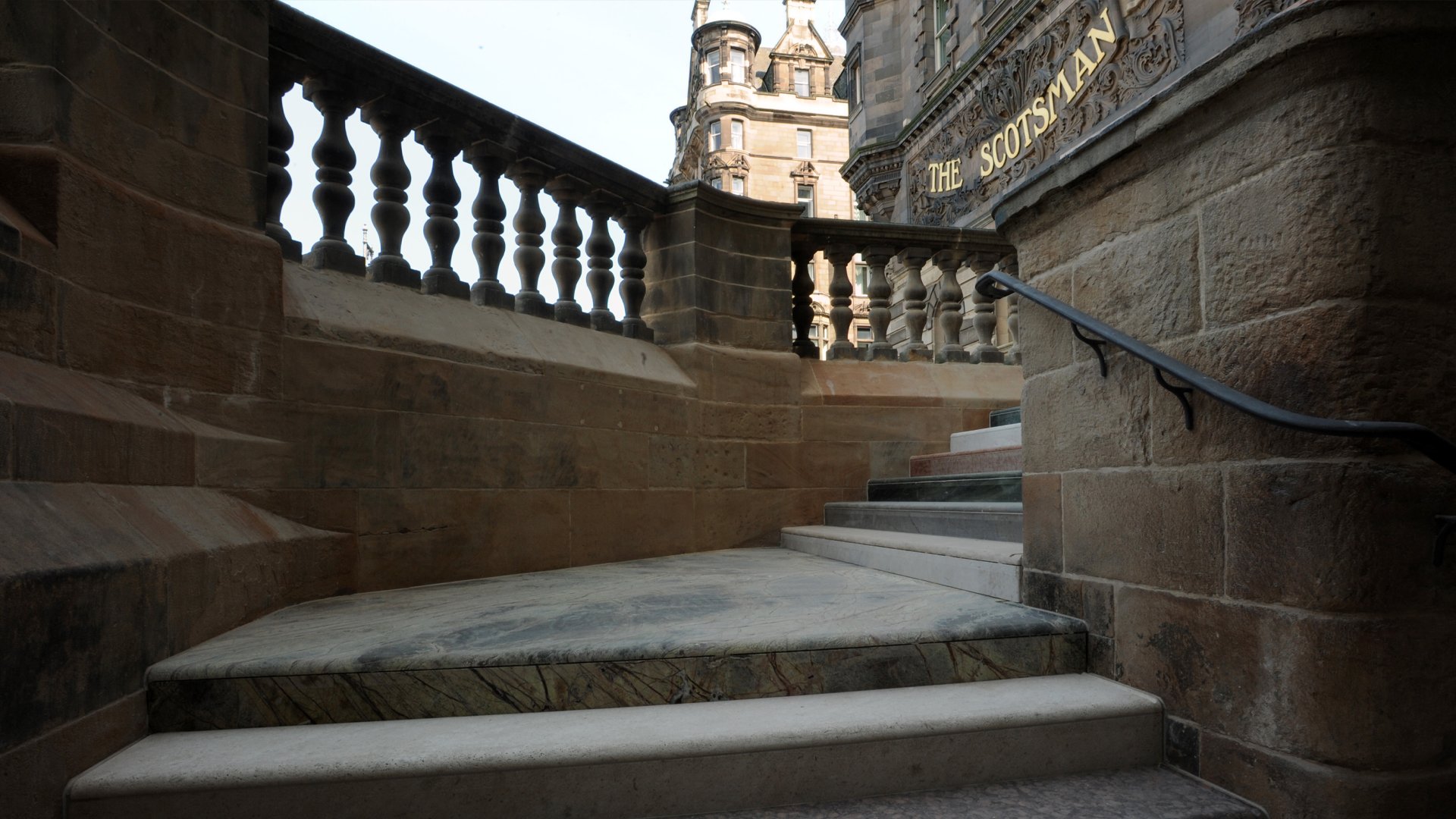 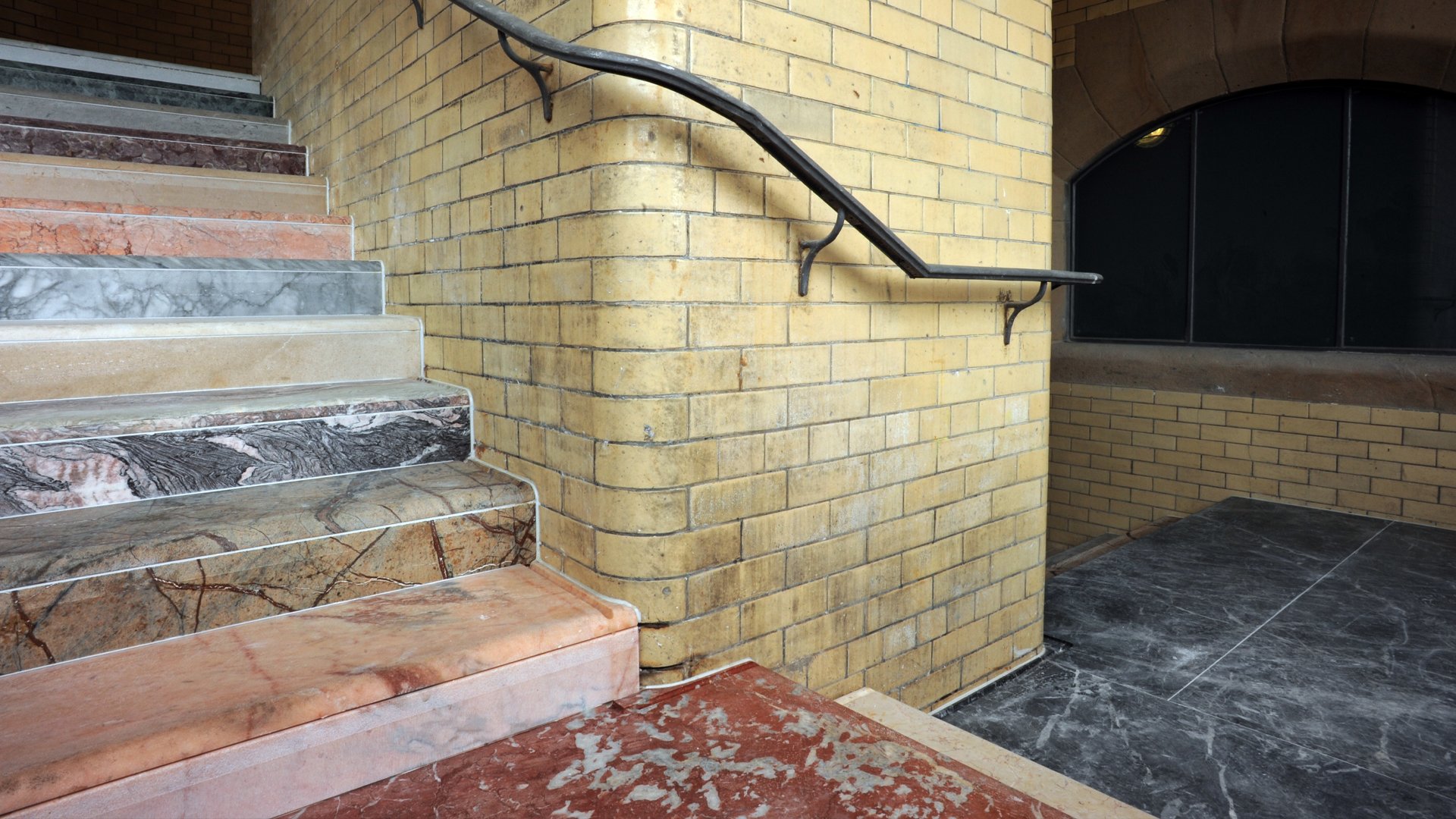 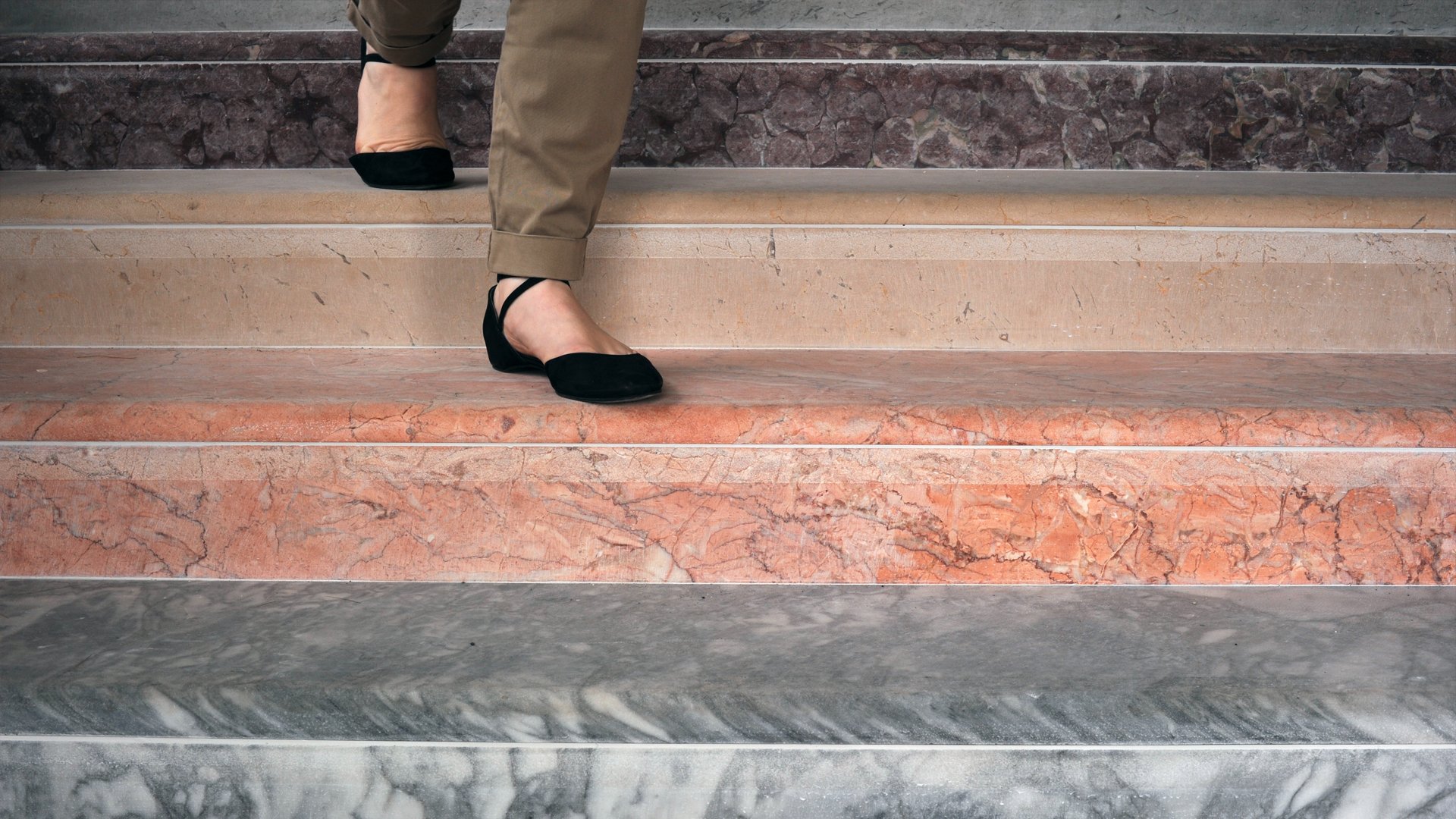 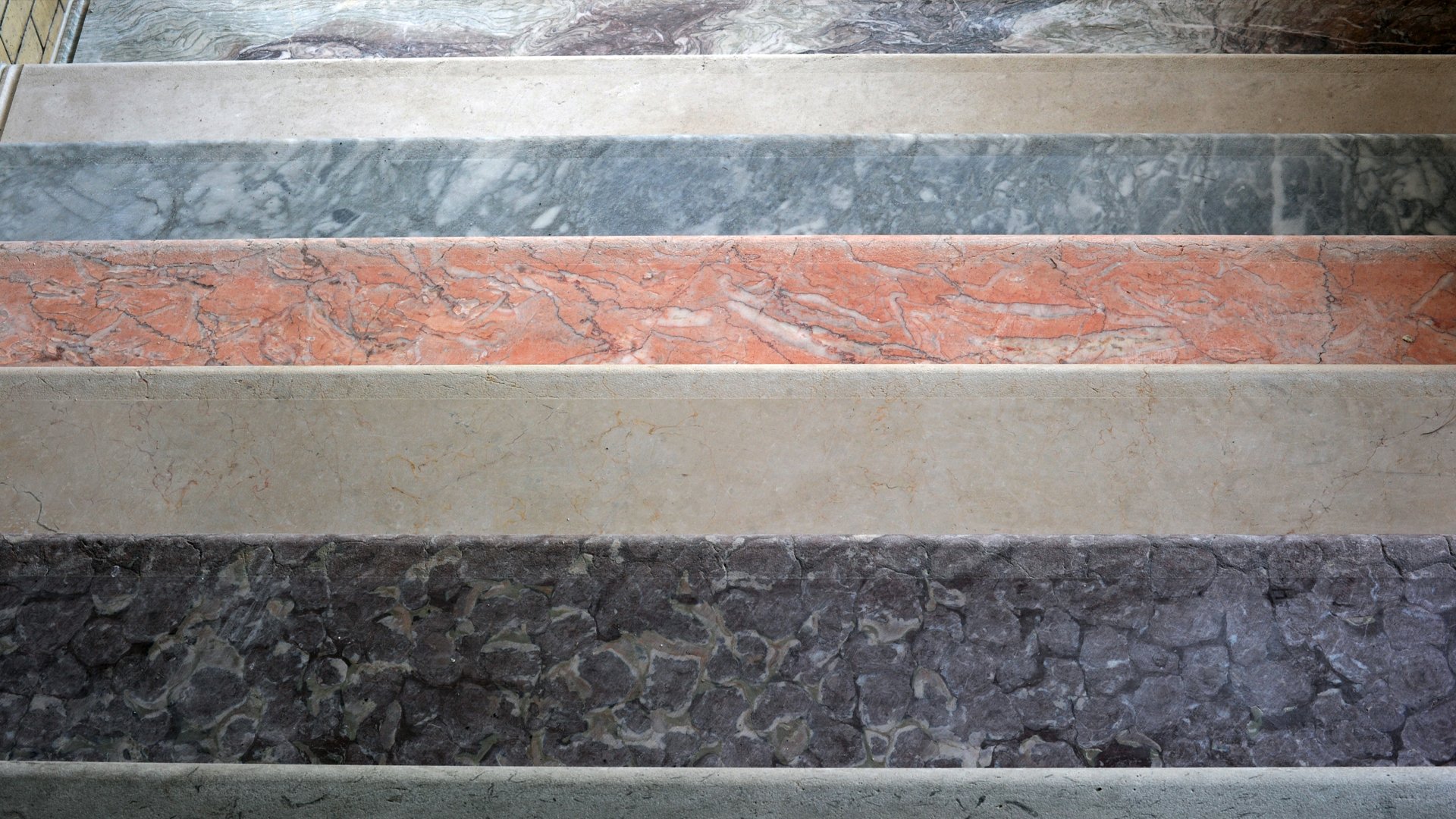 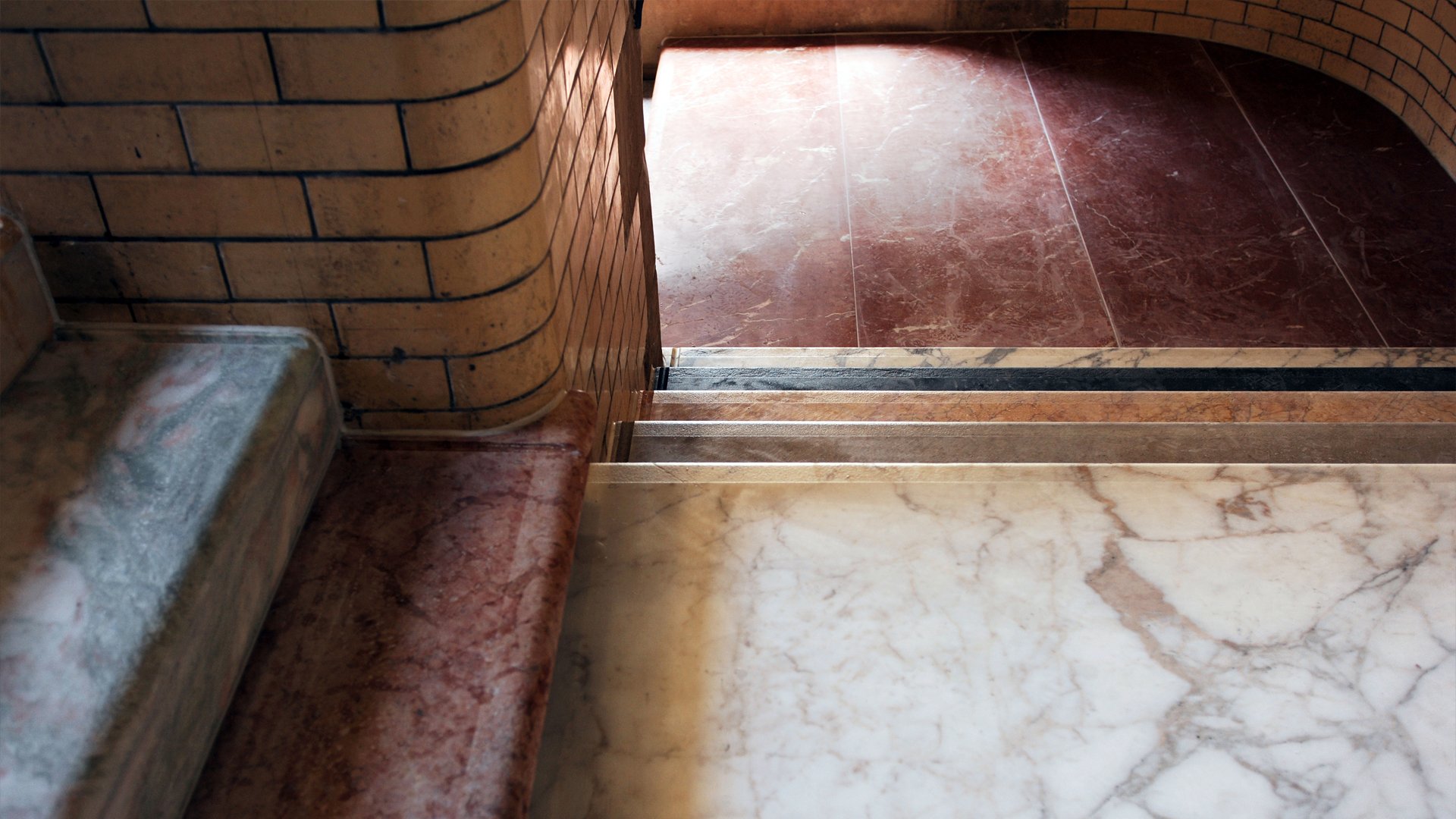 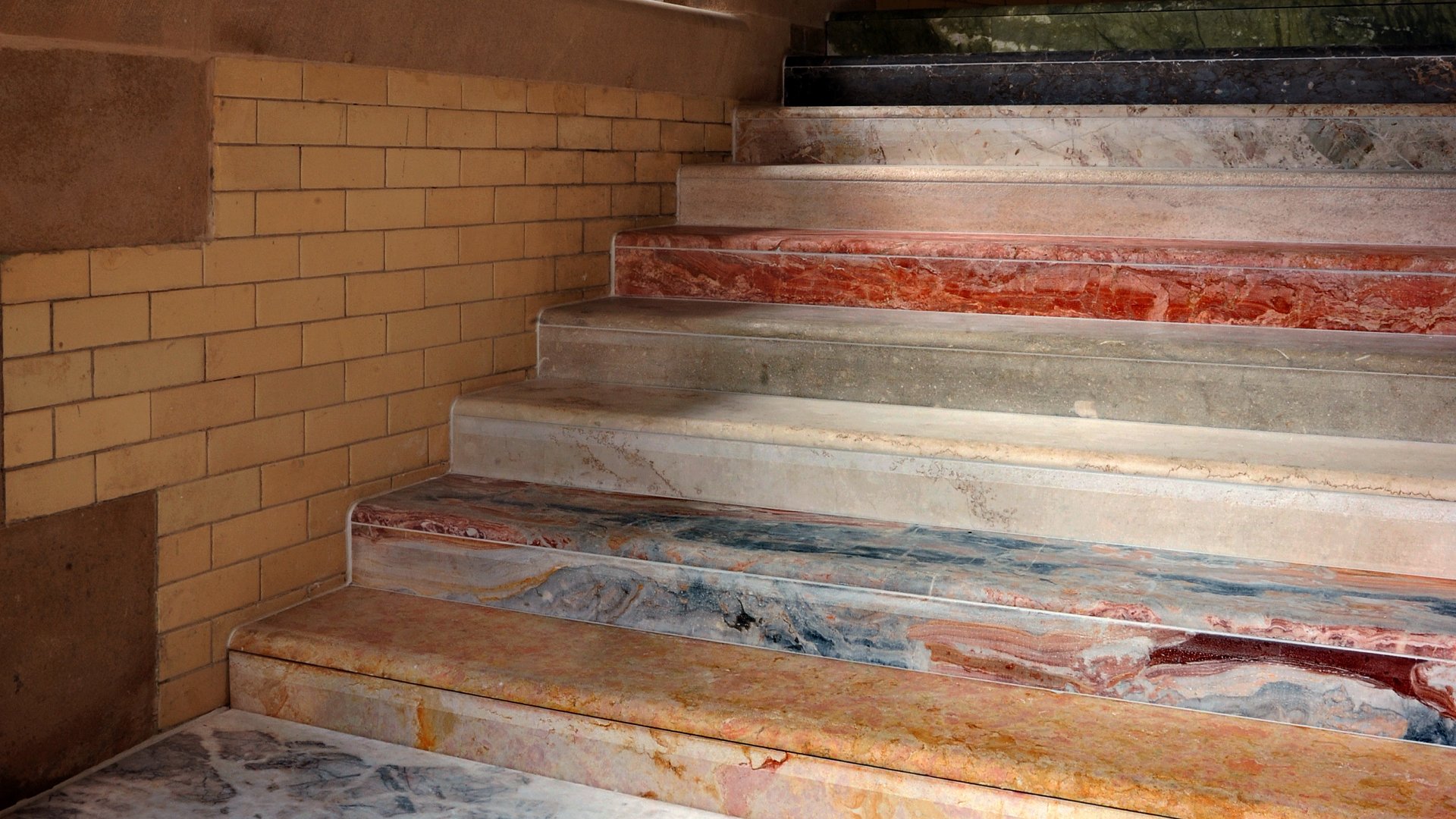 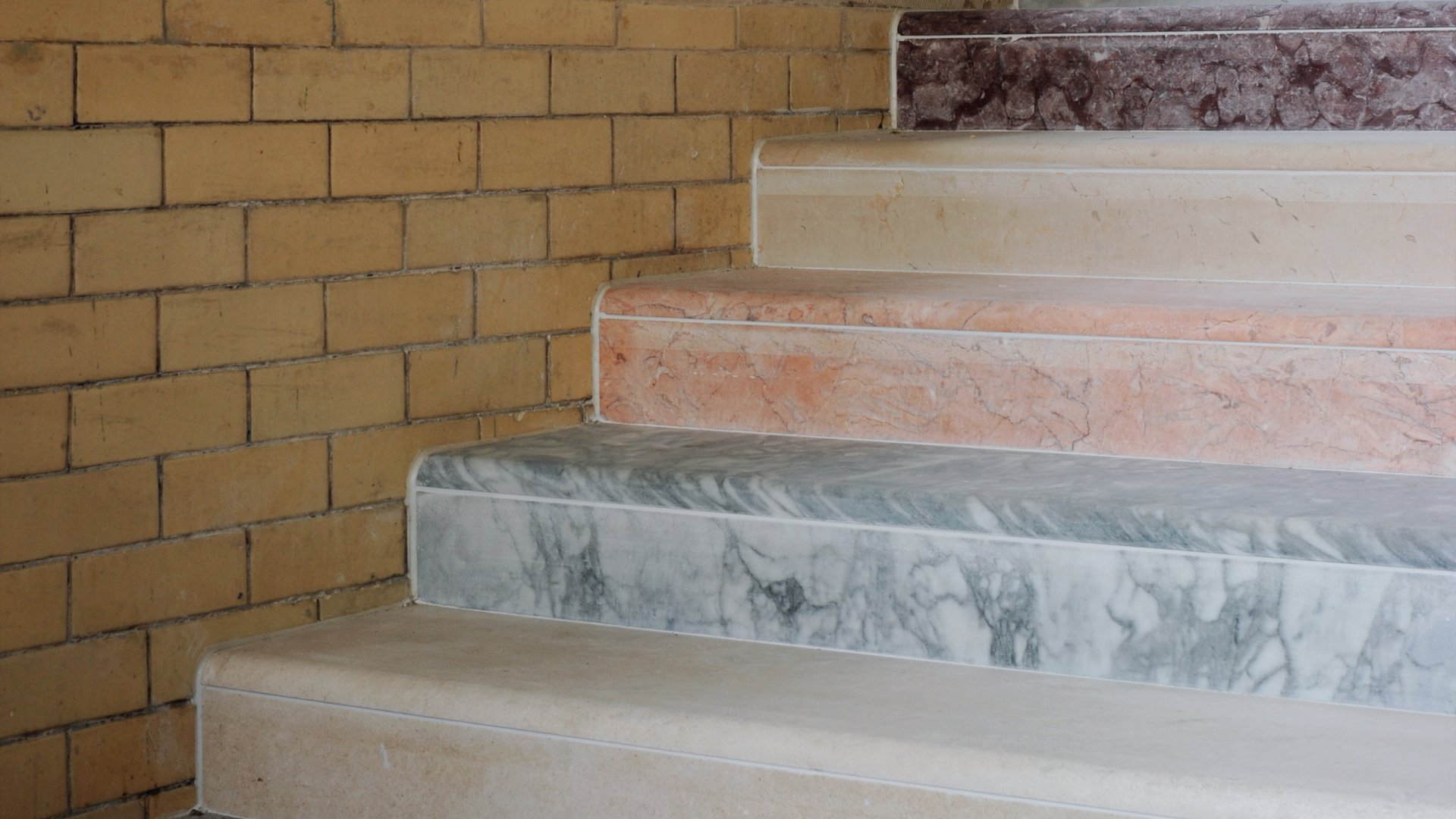 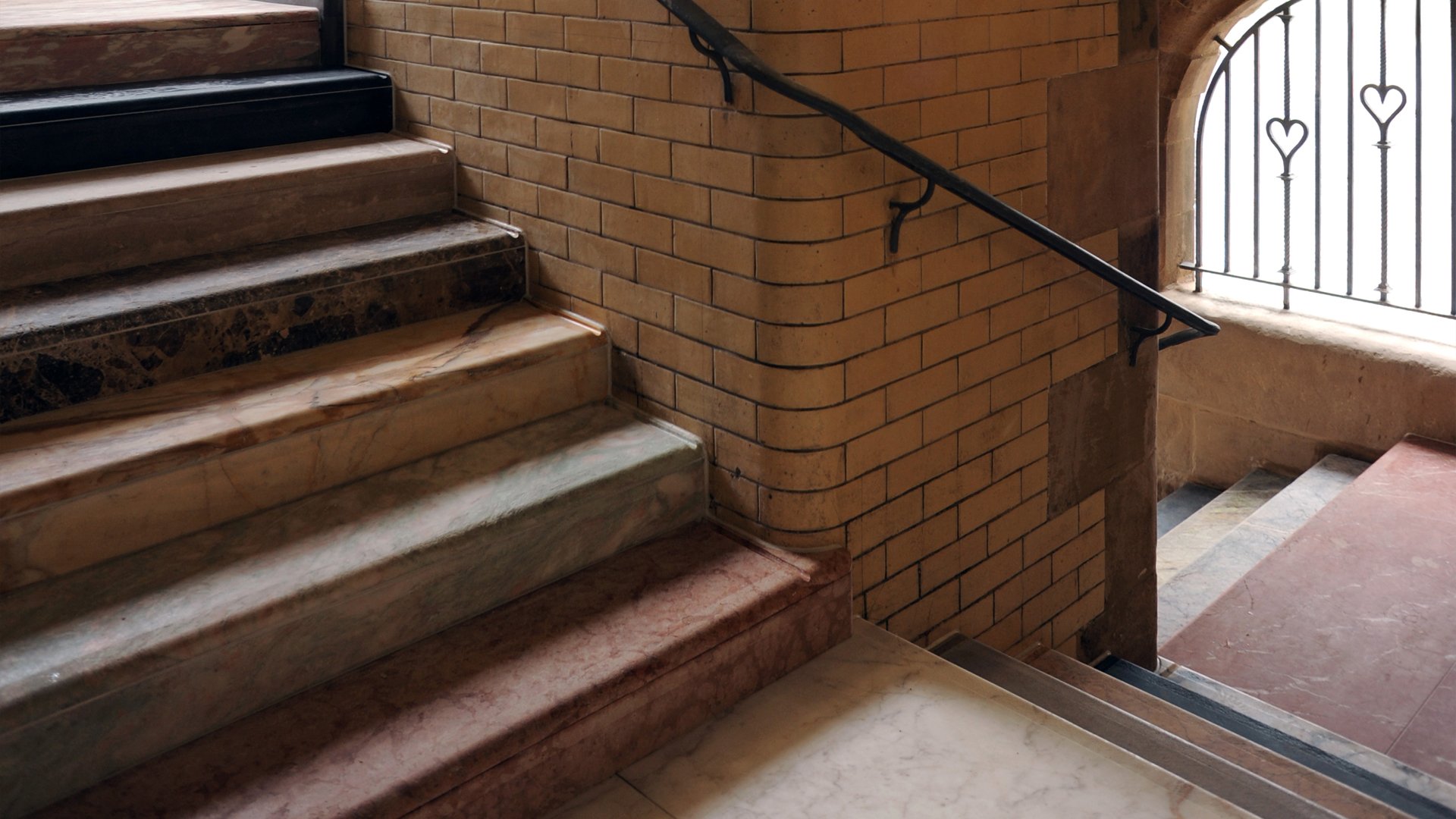 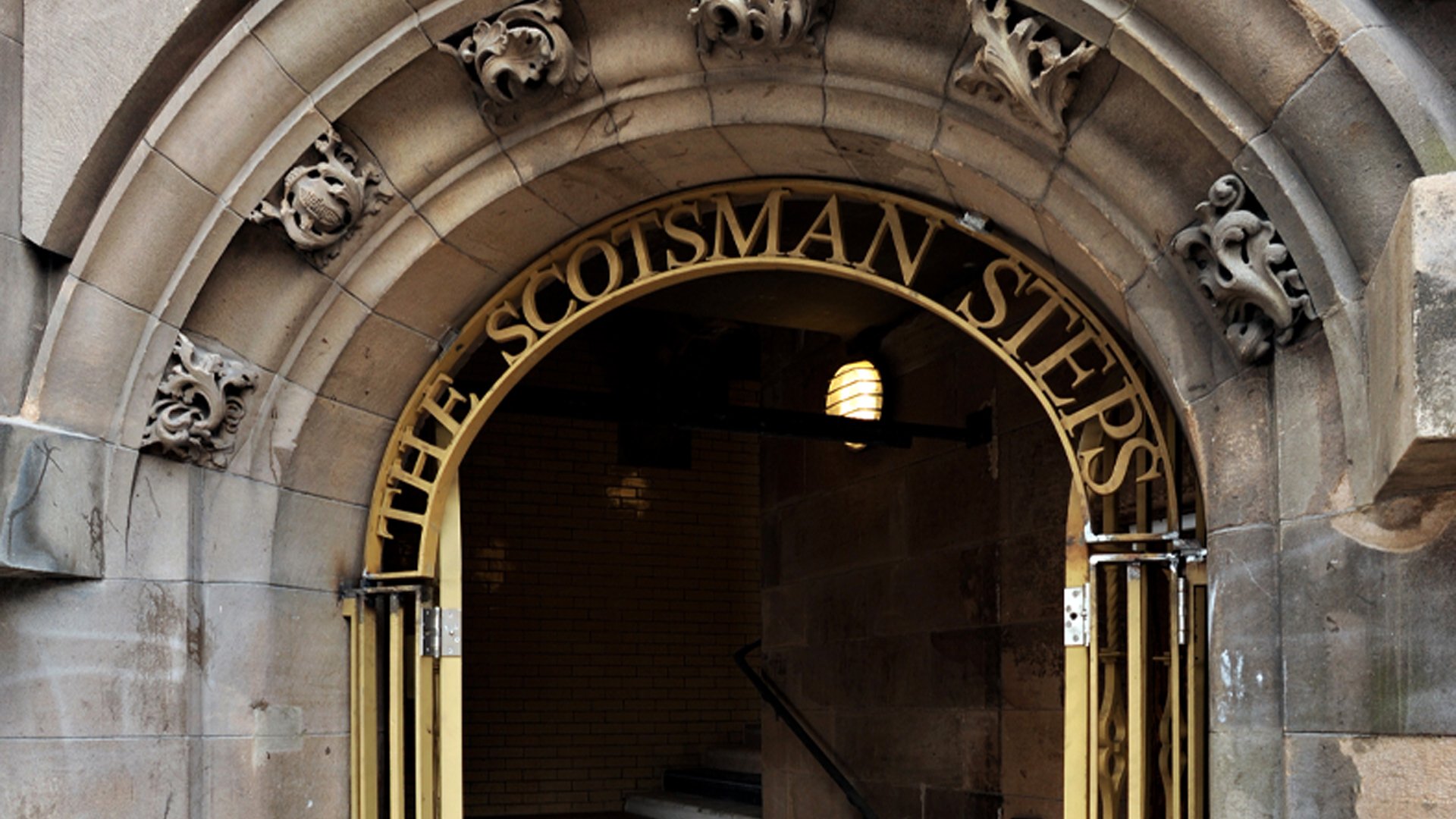 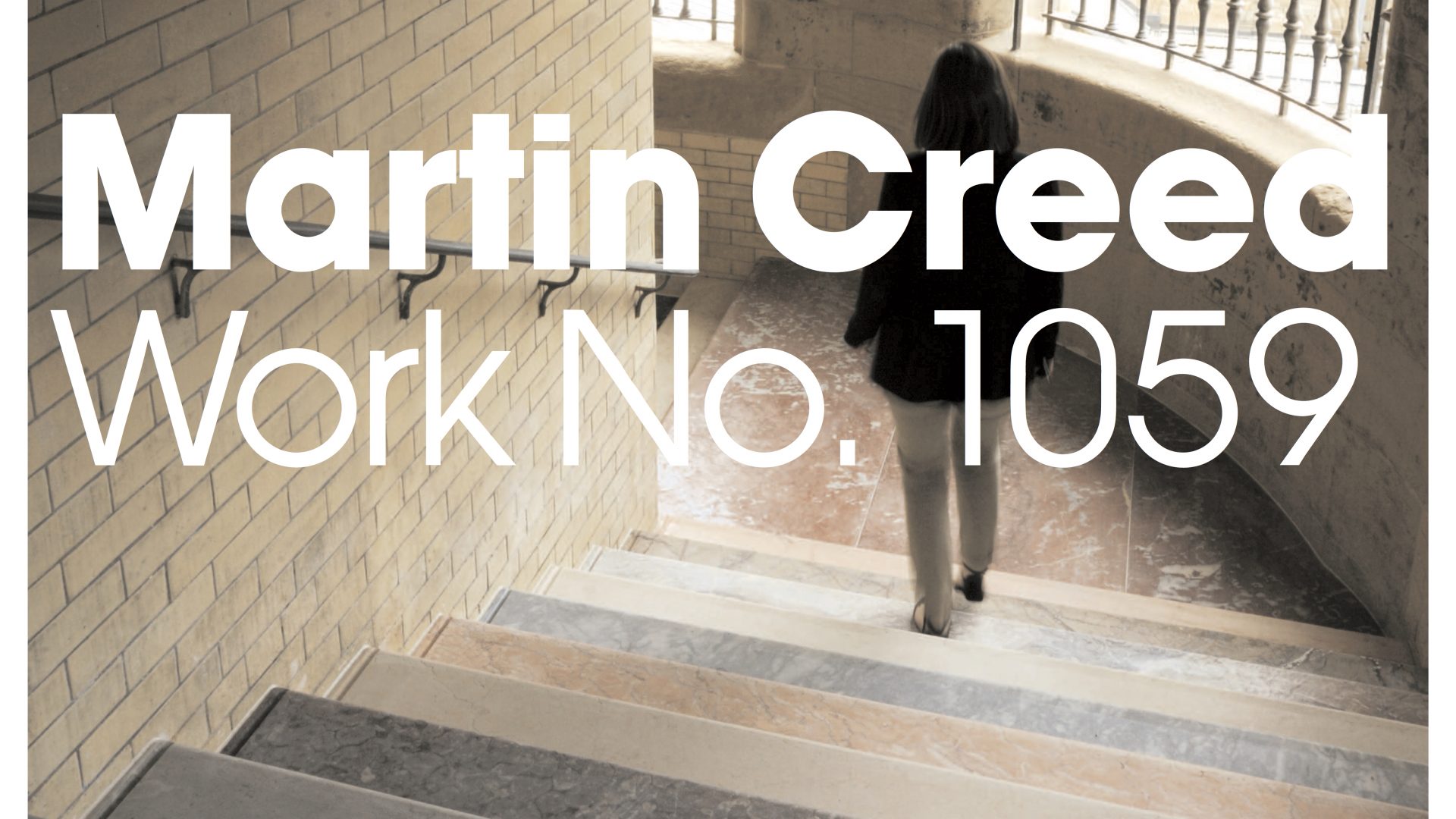 Martin Creed’s Work No. 1059 was commissioned by The Fruitmarket Gallery as part of Creed’s solo exhibition Down Over Up which was presented at The Fruitmarket Gallery in the summer of 2010 and was one of the most popular exhibitions in the Gallery’s history. The exhibition brought together works united by the idea of stacking and progression in size, height and tone. There were graded lines of nails and cactus plants; stacks of chairs, tables, lego, planks and boxes; a recorded choir singing up and down the scale as the gallery lift rose and fell; and the central staircase was transformed into a synthesiser, with each tread sounding a different musical note.

This last piece made manifest the extent to which the rest of the work in the exhibition was about going up and down steps. Creed talked about the exhibition as a whole in terms of a picture of growth; showing process, progress and things in movement. Throughout its preparation, he was planning Work No. 1059. This piece, installed almost a year after the exhibition opened, speaks very clearly to it.

The Scotsman Steps are an important part of Edinburgh’s cityscape: they link the Old and  New Towns and have historically been considered as a road and are looked after and maintained by the City of Edinburgh Council. Before restoration by Edinburgh World Heritage and City of Edinburgh Council, they were extremely dilapidated, and vulnerable to misuse. The Fruitmarket Gallery suggested commissioning a public artwork for the Steps as part of the renovation, to help change the public perception of them, and to fulfil the Gallery’s mission to make contemporary art freely accessible, bringing it out of the gallery to engage people where they are.

Martin Creed, with his smart response to public space, his ability to engage with materials and their surroundings, and his understanding of the creative possibilities embedded in the act of going up and down steps, seemed an obvious choice for the commission. From the beginning, he considered the Steps as a thoroughfare, proposing to resurface them with different and contrasting marbles from all over the world, each  step and landing a different colour. The idea turns around a familiar material (though not one  normally associated with Edinburgh) used in a familiar way. It acts as a sampler, introducing 104 different marbles, putting the material as well as the visitor through its paces. Creed himself has described the work as a microcosm of the whole world – stepping on the different marble steps is like walking through the world.

Work No. 1059, like the works shown in Down Over Up, is an exercise in adding and subtracting by degrees. To make it, Creed started from nothing, and added something. The process of addition, though immensely complicated, involving architects, planners, engineers, stone cutters, builders etc, results in an intervention whose deceptive simplicity seems almost to take the addition away (though extravagantly marble and chromatically beautiful, the steps are still only steps, after all).

Creed is a musician as much as an artist, and talks about his process more in terms of music  than of art. He sees himself as the composer of his work, writing a score to which others – curators, technicians, viewers – bring their own interpretations. Music is an art form that makes itself as you listen to it, and this is important for Creed – there is often the sense that his work is making itself in front of you rather than letting you in on the tail end of a process mostly achieved in the studio.

Work No. 1059, though architecturally a complex piece of stone work and engineering  that took two years to plan and achieve, is an artwork that is made and remade every time a viewer walks up or down it.

The Scotsman Steps are owned, managed and maintained by the City of Edinburgh Council.