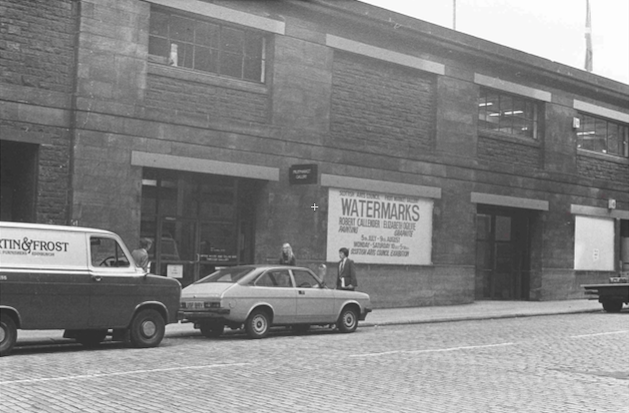 A space to show art to people since 1974

The Fruitmarket today brings together two former market buildings: to the west, a structure built in 1889, but only recently added to the Fruitmarket’s footprint by Reiach and Hall Architects; to the east a former fruit and vegetable market built in 1938, converted into a gallery in the 1970s by John L Patterson. This part of the building opened in 1974 as a Scottish Arts Council venue, occupying just the ground floor, with the New 57 Gallery on the floor above. Its early years were characterized by exhibitions of contemporary art curated by the Scottish Arts Council, which often travelled to other venues such as the Third Eye Centre in Glasgow. Other exhibitions were guest-curated by galleries including the Scottish Photography Group (now Stills Gallery) and the Richard Demarco Gallery.

In the 1970s artists such as Mark Boyle, Richard Hamilton, Eduardo Paolozzi, Frank Stella, Willem de Kooning, Frank Auerbach, Henri Cartier-Bresson, Glen Onwin and David Hockney all had solo exhibitions, while group shows often looked to Europe, exhibiting work by Polish, Finnish and Dutch artists. The first solo exhibition by a woman artist at the Fruitmarket was in 1979, with the video installations of Tamara Krikorian.

1984 saw a shift, with Mark Francis becoming Director and the Gallery taking over the upper floor of the building. Francis’s ambitious programme brought in many world-renowned artists from Nancy Spero to Dan Graham, whilst also giving space to Scottish artists such as Steven Campbell and Gwen Hardie. At this time the practice was to curate two shows alongside each other – one upstairs and one downstairs – making for some evocative juxtapositions, such as John Cage shown alongside Jean-Michel Basquiat in 1984. In 1987, the group exhibition From Two Worlds showed the work of Sonia Boyce, Rasheed Araeen, Lubaina Himid, Keith Piper and Zarina Bhimji, among others.

Fiona McLeod took on the Directorship in the late 1980s with shows by artists including Richard Hamilton, Max Ernst and Marie-Jo Lafontaine. She also initiated the Gallery’s annual ‘Open’ exhibitions, selected by a jury, which gave artists working in Scotland the chance to show their work at a major Scottish institution. This continued until 1990.

Graeme Murray Gallery guest curated a number of shows in the early 1980s, and in 1992 Murray took up the helm as Director. He took on the bold redevelopment of the Gallery by Richard Murphy Architects, re-opening with an exhibition by Scottish artist Gerald Laing in 1993. Murray’s programme had a distinctly international strand, with landmark group exhibitions by Japanese, Korean, Chinese and Israeli artists, and ‘blockbusters’ by artists such as Yoko Ono and Jeff Koons. Murray’s passion for land art and the natural world also shone through in his programme, with exhibitions by Andy Goldsworthy, David Nash and Dalziel + Scullion among others. And in 1999 the Gallery introduced the exhibition series ‘Visions for the Future’, which gave a platform to early to mid-career Scottish artists, including some now well-established names from Ross Sinclair and Graham Fagen to Victoria Morton and Rosalind Nashashibi.

Fiona Bradley took on the Directorship in 2003. Her programme continues to build on the strengths of the Gallery’s history of showing Scottish and International contemporary art, developing strands that explore the legacies of both surrealism and minimalism, and notably giving high profile exhibitions to women artists.

In 2021 the Gallery re-opened after a period of redevelopment undertaken by Reiach and Hall Architects, extending into the neighbouring building to the west. The renovated existing galleries – which retain their light and brilliance – and the new warehouse – which has a rougher and more industrial characteristic – will continue to play host to an ambitious programme of Scottish and International contemporary art.